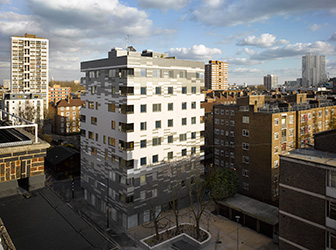 Why the White House Is Spending Millions to Promote Wood Structures

The Department of Agriculture doesn’t usually meddle in architecture, but this week at an event at the White House, it announced an unusual project: A $1 million competition for high-rise buildings built out of wood—and another million that will go to educating architects about it.

You might remember that President Obama signed a new $956 billion Farm Bill in early February. A big focus of the new bill is “Made in Rural America,” an initiative designed to help rural farmers find and take advantage of economic opportunities. Like, say, helping lumber companies develop and market high-tech wood products to architects who might otherwise spec steel and concrete in taller buildings.

Let’s back up for a second, though: Skyscrapers made from timber?? Is there really a market for wood that can be used in tall buildings? In fact, there is—though it’s very young.

In 2009, a nine-story apartment building in London became the tallest all-timber building ever, thanks to a relatively new technology: Prefabricated, cross-laminated wood panels. In simple terms, these panels are made in a factory by stacking up dozens of pieces of natural wood in alternating directions, then pressing them into a single timber beam. The alternating grain directions make the timber super-strong:

And as to fire protection, it turns out that these timber columns could actually be better than steel in a fire. While the panels will burn, they won’t fail catastrophically like steel does when it gets very hot. Timber stays stable for longer because it forms a layer of insulating char when it’s exposed to flame. And while it’s not fireproof, it’s far harder to burn than raw wood, since it’s industrially treated and is rarely left exposed. “In Europe, cross-laminated timber has been around long enough that standards for issues like fire protection and acoustics are being incorporated into building codes,” explained The New York Times in 2012.

But it must be harder to build with, right? Nope. Because they’re lighter and take less work to actually assemble, these panels are way faster to build with. At London’s Stadthaus, a team of four put the first eight floors of structure together in less than a month. The entire building was finished in less than a year.

Clamor for more research into high-rise timber has been growing ever since: Swedish architects C.F. Møller proposed a 34-story timber skyscraper for Stockholm last year. Their design would build a timber apartment building around a concrete core:

And other architects have followed—which brings us back to this week’s event at the White House. Agriculture Secretary Tom Vilsack’s announcement about the forthcoming design competition at the White House included an appearance by a team of Chicago-based architects from SOM, who have been working on timber high-rise research for a few years now.

SOM’s Timber Tower Research Project is more of a study than a design. It’s a comprehensive structural system that aims even higher than 34 stories—thanks to a combo of timber panels and concrete:
The hybrid system combines the benefits of both systems: The lightness and carbon storage of timber and the strength of concrete, which reinforce the connecting joints. SOM says the system would reduce buildings’ carbon footprints by up to 75 percent, but be strong enough to support buildings over 40 stories.

So American architects are thinking about timber construction. The problem the White House wants to solve is where they’ll get it from. The London tower’s timber was sourced from a company in Austria called KLH, which pioneered the manufacturing of the stuff. But the US government would like that wood to come from the US, not Europe—hence its partnership with WoodWorks, a nonprofit that aims to connect architects with stateside suppliers.

There are plenty of other things standing in the way of timber towers, as The Oregonian explains: Building codes that don’t allow the use of wood in buildings over a certain height, for example, not to mention shifting the longstanding public perception that wood buildings are weaker, more dangerous, and less durable. There’s also been a surge in lobbyists hired by chemical and plastics companies, which are waging a war against LEED and other sustainable building initiatives—which they see as legislation that harms their businesses.

So as President Obama promises to spend billions helping rural America, he’s also looking at the lumber industry—which, from the Federal Government’s perspective, could be growing the next big building material in our own backyard.

PrevPreviousDetroit Airport Saves $1.2M Per Year with LEDs
Next5 Ways Going Green is Great for BuildingsNext