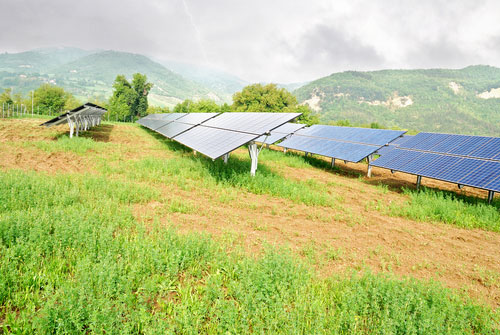 The Top 10 Developments in Clean Energy of 2013

The end of the year is always a good time for reflection and introspection, but why should we stop at analyzing ourselves?  As 2013 draws to a close, I invite you to take a couple of moments to relive some of the major highlights in clean energy that took place this year. And share your own 2013 clean energy milestones in the comments below.

Solar power used to be considered a field dominated by hippies and people living in fantasyland; it was a long way from becoming available to all Americans. It appears that we have come that “long way;” solar is not only visible in mainstream daily life, but it’s even attractive to major investors. Yes, Warren Buffett has invested billions in renewable energy, but a more impressive milestone for clean power was SolarCity’s solar securitization. The offering was sold for $54 million dollars and carries a BBB+ rating from Standard & Poor’s. This bundling of solar leases allows the industry to be more efficient by allowing SolarCity to continue doing what it does best with a large sum of cash upfront. Securitization is nothing new to the investment field and is common with airplanes, trains, mortgages, auto loans, and life insurance. Now that SolarCity has proved it possible with renewable energy, it could be a major launching pad for the rest of the solar industry to expand and evolve.

Solar power had an absolute monster of a year and now five countries (Germany, Italy, the United States, Japan, and China) have surpassed installing ten gigawatts (GW) of photovoltaic power. Prior to this year, this exclusive club was only populated by Germany and Italy, so the growth is quite impressive. Though Japan had been a world leader in solar prior to 2004, the country’s emphasis on nuclear power stalled alternative energy growth prior to the Fukushima disaster which changed everything. Anxious to replace nuclear energy with clean electricity, a feed-in tariff has led to an explosion of solar growth in Japan that will continue into 2014. The nation is predicted to be one of the top two markets for solar in 2014. China’s central government has made renewable energy a priority as it combats the near-ubiquitous pollution around the country. 2013 was also the first year that solar installations (36.7 GW) exceeded wind installations (35.5 GW).

Amid the Oil Crisis of 1979, U.S. President Jimmy Carter installed solar panels on the White House to set an example for the American public. Just two years later, President Reagan ordered the panels to be removed believing that they were a “joke.” For nearly 30 years, the White House sat devoid of solar, but in 2013, President Obama finally made good on his earlier promise to re-install solar panels on the famous residence. Administration officials expect that the PV system will generate 19,700 kilowatt-hours of clean energy each year. Once again, the most important home in America will be a shining example for the rest of us.

Coal-fired power plants don’t just grow on trees; it may seem that way because the polluting energy producer has its fingerprints in nearly every country and is often the dominant energy producer in many of those nations, but power plants need money to be constructed, and a lot of it. So who funds these filthy behemoths? Historically, many of them across the developing world have been financed by international finance institutions (IFIs), but that will no longer be the case after 2013. Just this year alone saw the World Bank, European Investment Bank, European Bank for Reconstruction and Development, plus numerous national financing entities like the U.S. Export Import Bank and U.S. Trade and Development Agency swear off funding coal plants.  This is incredibly meaningful because developing nations will now need to quench their insatiable thirst for energy with cleaner power.

5) Coal gets retired across America

While it is a great step to halt the future construction of coal-fired power plants at home and abroad, there are still many existing emission sources of the polluting fuel, spewing toxins into the air and environment. According to the Sierra Club’s Beyond Coal campaign, 158 U.S. coal plants have been retired or plan to be retired shortly to date. Mosaic covered the retirement of the largest coal plant in New England, the 1.5 GW Brayton Point plant in October, but other states such as Nevada and Georgia have made amazing strides as well. In Nevada, the Moapa Paiute tribe helped to shutter the Reid-Gardner coal plant and is breaking ground on a 350 MW solar plant nearby to offset the energy loss. Georgia meanwhile, is racing to shut down several plants in compliance with the EPA’s regulations on heavily-polluting emissions sources.

In early January 2013, Mosaic crowdsourced $1.1 million of investment for four solar power projects across California, Arizona, and New Jersey. The projects were on the online platform for less than 24 hours before they sold out. By leveraging the power of many, Mosaic was able to bring life to small-scale PV projects that would not have been cost effective had the funding come from a bank or similar lending institution. Mosaic has come a long way since January with nearly $6 million having been invested on the platform by more than 2,500 investors, funding 19 different projects. Mosaic looks to bring on even more projects to the platform in 2014 as it continues to grow and mature. During the holiday season, Mosaic is giving the gift of solar with $25 to new investors for their first investments. That’s enough to match the minimum investment requirement on the platform if you choose to invest no extra money.

The National Resource Defense Council (NRDC) states that 2.4 billion tons of carbon dioxide are pumped into that atmosphere each year by American power plants. That’s about 40% of the country’s total CO2 emissions. Fortunately, the Obama administration has made good on its commitment to enforcing the Clean Air Act and has instructed the EPA to issue regulations on future power plants. The new legislation states that all future coal plants will need to emit less than 1,100 pounds of carbon dioxide per megawatt hour produced. New large natural gas-fired plants will be restricted to under 1,000 pounds per megawatt-hour and smaller ones can be under 1,100 pounds per megawatt-hour. Essentially, this renders it cost-prohibitive to build future coal plants and ensures that natural gas plants will not emit more than they currently do. Coal plants are the largest polluters in the country in terms of carbon dioxide, arsenic, and other chemicals, so this legislation is a huge win for pretty much everybody on planet Earth. The EPA is also crafting legislation to affect existing power plants as well, but it will be released sometime in the future and is sure to run into many legal challenges along the way.

Since his inauguration in 2009, President Obama has sometimes drawn the ire of the green movement for failing to execute and implement policies like he said he would during his campaigns. To his credit, he has taken some steps forward. A major step being his recent executive order demanding that the federal government increase its usage of renewable power to 20% of its energy consumption by 2020. That represents a tripling of current renewable energy usage in just 6 years. Given that the federal government is such a large energy consumer, the large amount of renewable power necessary to achieve this feat will be quite substantial and ensures demand for certain clean energy suppliers. Combine this demand with improving technology and continuously falling prices of clean power, we are left with a recipe for some serious positive change.

One of the major sticking points in international treaties towards combating climate change has been the blame game played between developing and developed countries. Specifically, the U.S. has said that developing countries like China need to make a serious effort to lower greenhouse gas emissions before the U.S. does. To China’s credit, they have done exactly that. This year, China has implemented carbon trading schemes (like cap and trade) in Beijing, Shanghai, Shenzhen, and will have a fourth one in the province of Guangdong very soon. After the European Union, the trading scheme in Guangdong is expected to be the world’s largest with some 240 companies expected to be covered in the market, including state-owned energy companies Datang, Huaneng, and Shenhua. Though the implementation is not expected to be easy or flawless at the beginning, this is a great first step that with time should cover the entire country and will assist China in reaching its goal of reducing emissions per unit of GDP to 40-45% below 2005 levels by 2020. It is becoming increasingly difficult for the Americans to say that the Chinese aren’t pulling their weight when it comes to combating climate change.

10) The Electric Car Has Come Back From The Dead

In 2006, a movie titled “Who Killed the Electric Car?” was released in an attempt to draw attention to the odd and mysterious demise of the first modern electric vehicles (EVs). EVs truly emerged from hibernation in 2013 as it turned out to be a huge year for electric cars compared to 2012 when they really first debuted on the scene. Electric vehicles seem to be facing a chicken or the egg problem – does one buy an electric car without a national (or at least regional) charging system or does a charging infrastructure arise without electric vehicles to charge? This uncertainty, in addition to range anxiety, has stifled demand, but as more and more EVs hit the road, there will be more charging ports available and more people will become aware of the benefits and realities of EV ownership in gasoline-dominated world. This is data is already outdated, as there have been sales reported through November 2013, but the following information via Evobsession is really interesting. From September 2012 to September 2013, total electric car sales are up 448% (33,617 vs. 6,135), Nissan Leaf sales are up 208% (16,076 vs. 5,212), Tesla’s sale are up 8,056% (13,050 vs. 160), Ford’s electric and hybrid sales are up 328% (67,232 vs. 15,708), and Toyota’s electric and hybrid sales are up 9.5% (271,538 vs. 247,878).  Additionally, Norway has seen electric vehicles recently dominate its entire automobile market with the Nissan LEAF as their best-selling car in October, taking the crown from the Tesla Model S, which held that title in September.

Progress very rarely takes a linear path and this year proved to be no exception. There were milestones and missed opportunities, but there is no doubt that 2013 was a big step in the right direction for a healthier planet and estimates for 2014 show that next year will be an even better year for planet Earth.  Do these milestones fit in your top 10 clean energy developments for 2013?  Make your voice heard in the comment section.
Learn more: