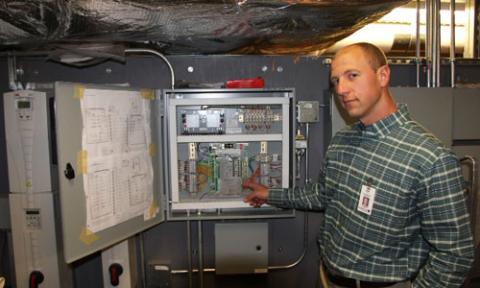 St. John’s Hospital in Maplewood, MN, received a $300,000 grant for a $1 million building automation system upgrade and a retro-commissioning project that covered all facility air handling units and heating and cooling systems.

State ARRA-funded C&I grant helps fund building retrofit: St. John’s Hospital in Maplewood, MN, is constantly seeking ways to improve its infrastructure in the most cost-effective ways. And when the stimulus-funded Commercial and Industrial Grant Program from the Minnesota Department of Commerce came along, it made energy efficiency easy.

St. John’s Hospital received a $300,000 grant for a $1 million building automation system upgrade and retro-commissioning project that covered all facility air handling units and heating and cooling systems. The grant, combined with other energy improvements financed by the St. Paul Port Authority and the Trillion Btu Program, will save St. John’s about $200,000 per year in energy costs. Simple payback for the $1 million project is about five years.

“We’re always looking for ways to improve our infrastructure—to improve clinical quality, increase efficiency, reduce risk, and improve safety,” said Jed Field, system director of engineering for HealthEast Care System. “The state grant allowed us to take the extra step or two from an energy-efficiency perspective to achieve the maximum energy savings for our buildings.”

Field said the grant was perfect timing for several large-scale improvements the hospital needed. The work, completed in 2011, included operational improvements and control of heating, ventilation, and air-conditioning systems to attain maximum energy performance. New NEMA premium efficiency motors were installed to replace all non-NEMA premium motors 10 HP or larger. The new building automation system was implemented so that equipment can be turned down or turned off when the spaces served are unoccupied. Equipment adjustments were made and special pump controls and valves were installed for precise control to meet heating and cooling needs.

The energy upgrade work on St. John’s Hospital not only reduces energy costs, it improved the indoor air quality and comfort for patients and staff. It also generated work for at least two full-time equivalent jobs for one year, Field added.

Field said virtually any commercial or industrial facility that is 20 years or older figures to save 20 percent on their energy bill if they make significant energy upgrades. “There are great opportunities for retrofitting buildings,” Field added.

36 facilities realize energy efficiency, cost savings: St. John’s is just one of dozens of commercial, industrial and nonprofit facilities throughout Minnesota that are realizing handsome energy and cost savings, thanks in part to the $4.1 million energy upgrade grant program administered by the Minnesota Department of Commerce, Division of Energy Resources. The grants, funded by the American Recovery and Reinvestment Act of 2009 (ARRA), supported cost-effective energy efficiency improvements at 36 facilities in Minnesota.

Those 36 facilities will realize more than $3 million in ongoing energy savings every year for the foreseeable future, said Mike Rothman, commissioner of the Minnesota Department of Commerce. “This targeted investment of one-time funds will pay for itself over and over again,” said Rothman. “It has helped dozens of facilities dramatically reduce their energy consumption and realize millions of dollars in ongoing cost savings. That’s good for business, good for our environment, and good for our economy.

“Commercial buildings and industrial facilities like St. John’s Hospital consume about half of our state’s energy,” Rothman continued. “That’s why it makes sense to target large buildings like these. Targeted retrofits using one-time investments deliver the biggest bang for our buck.”

The program, which launched in December 2009, received 150 proposals out of which 39 were selected to receive grants. Most of the grants—36—were awarded for direct energy improvement projects, and three were given to nonprofit entities to operate revolving loan programs to help finance energy efficiency projects. For the direct improvement projects, the program required a financial match component. Projects were ranked according to projected energy savings, payback, leveraged additional spending per grant dollar, and job labor hours of work generated by the funding.

Average payback of four years: The grantees included a wide cross section of for-profit and nonprofit entities. Energy efficiency measures achieved included upgrades to lighting, heating, ventilation and air-conditioning systems and controls and improvements to industrial processes. Overall, the projects will save an estimated 440,000 MMBtu per year, or enough energy to heat 8,150 homes per year, and will have an average payback of four years. The projects helped create or sustain more than 25 full-time equivalent jobs.

The Chippewa Valley Ethanol Plant in Benson used its grant to improve the process to recover waste heat from a stream of hot exhaust gases discharged from a regenerative thermal oxidizer. The process captures heat that normally would be exhausted into the atmosphere, runs it through a heat exchanger, and then uses it to avoid burning natural gas to produce heat needed for other parts of the ethanol production process. Chippewa Valley received a $500,000 grant to help fund the $2 million project. With estimated savings of $700,000 in natural gas costs per year, the project will pay for itself in about three years.

Gerdau Ameristeel U.S. Inc. of Duluth replaced two 30-year-old 900 kW power supplies with two new energy efficient 1,125 kW power supplies. The power is used to heat steel bar stock which is cut and forged into steel balls varying in size from 1 inch to 6 inches in diameter. The steel balls produced from the operation are used extensively in the taconite mining industry of Minnesota as well as other ore processing operations globally. The $1.5 million project, which received a $95,000 grant, is projected to reduce Gerdau’s energy consumption by 7 percent and save about $50,000 per year.

To learn more: For more information from the Division of Energy Resources, visit the efficiency section of our website. Incentives for businesses and residences to perform energy efficiency upgrades are listed in the Database of State Incentives for Renewables and Efficiency.

This case study was created by the Minnesota Division of Energy Resources, Department of Commerce.