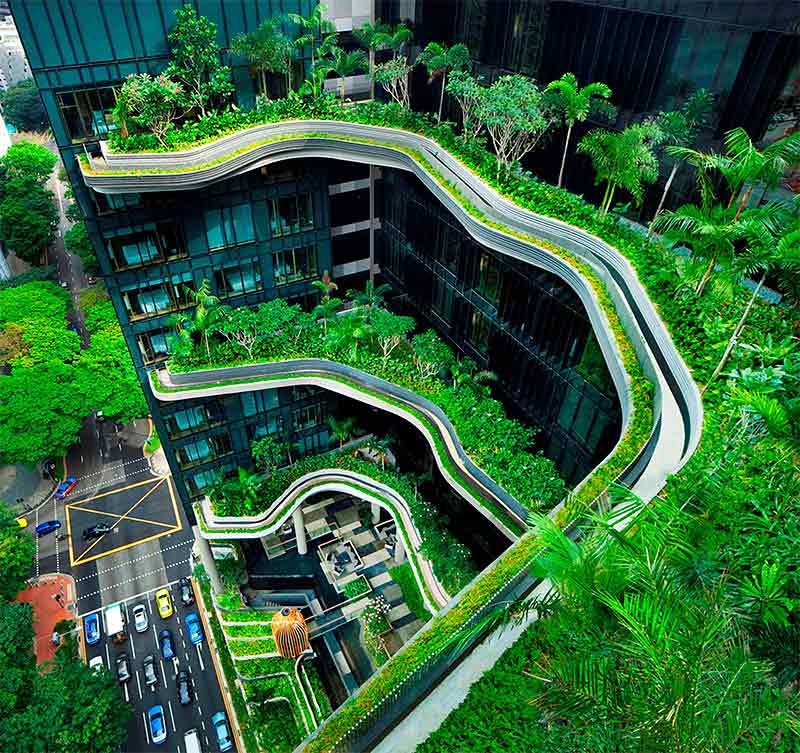 Singapore Takes the Lead In Green Building in Asia

By encouraging the adoption of innovative architectural design and energy-saving technologies, Singapore has emerged as a model of green building in Asia — an important development in a region that is urbanizing more rapidly than any other in the world.

At street level, 313@somerset looks like any other glittering mall in downtown Singapore. But on closer inspection the eight-story building has skylights, solar panels, energy-saving elevators and escalators, highly efficient air-conditioning units, and software that monitors the building’s carbon dioxide emissions.

Across town, a new hotel, Parkroyal on Pickering, displays its green credentials in the form of an artfully tiered façade dotted with tropical ferns and creeping vines. Along with an efficient cooling system,  its green perks include rainwater harvesting, lighting sensors, and high- performance window glass and hot water pumps. Entering the wood-paneled lobby, which has a wall of tropical mosses, a visitor is reminded of a rainforest — no matter that the building lies in the heart of the banking capital of Southeast Asia.

These structures underscore Singapore’s commitment to greening its built environment through generous incentive schemes and a building-rating tool that encourages such improvements as sun-shading exteriors, water-efficient fittings, computer modeling of energy flows and carbon emissions, and highly efficient air conditioning and ventilation systems. Since the rating tool launched in 2005, Singapore’sBuilding and Construction Authority (BCA) has certified 1,534 new buildings and 215 pre-existing ones. Together they account for more than a fifth of gross floor area in this island city-state, which has a population of five million and is roughly half the size of New York City.

“As we become more and more urbanized, we want to make sure our built environment is sustainable,” says John Keung, the BCA’s chief executive.

There is wide agreement among development specialists that promoting green building in Asia has the potential to produce large energy savings and make polluted cities more habitable while partially mitigating the impacts of global warming. The United Nations reports that 40 percent of people in the Asia-Pacific region already live in cities, and by 2050 the figure could reach two thirds. The Intergovernmental Panel on Climate Change has predicted that in the coming decades Asian countries will lead increases across the developing world in building-sector emissions from energy use. In China alone, according to the global consultancy McKinsey & Company, the urban population may expand from 572 million in 2005 to 926 million by 2025, requiring the construction of four to five million new buildings.

Against this backdrop, Singapore has emerged as a model of green building for planners and developers across much of the Asia-Pacific region, where poor design reigns and developers have historically seen little incentive to invest in sustainability, according to Asia-based architects and sustainability experts. Singapore’s BCA is now marketing its rating tool,Green Mark, as a brand in Southeast Asia, China, and parts of tropical Africa — even in countries, such as neighboring Malaysia, where local rating tools offer competing certification systems. Some consultants say the rise of Green Mark is a direct challenge to LEED, or Leadership in Energy & Environmental Design, the rating tool of the U.S. Green Building Council. LEED also is expanding in Asia.

In the fight to reduce carbon emissions, the economic boom in Asia underscores the importance — and the limits — of reducing energy use in commercial and residential buildings. Even with Singapore’s aggressive push in the green building sector, non-industrial electricity consumption in Singapore increased by roughly 23 percent between from 2005 to 2011. That growth was due largely to robust economic expansion, with Singapore’s GDP doubling during that time. The government aims to achieve a 35 percent reduction in the energy intensity of its economy by 2030, which — depending on the rate of economic growth — does not necessarily mean the city-state will be using less electricity overall by that date.

The phrase “green building” suggests basic universal characteristics, such as an attention to energy use and attempts to bring a building in tune with its environment. However, it is also a somewhat fluid concept, and certifiers define green buildings differently in Singapore than in the United States or Europe. Notably, Green Mark places a comparatively larger emphasis on installation of technologically intensive cooling units, arguing that reducing energy consumption is essential in a tropical city where air-conditioning represents a large part of electricity demand. But some experts wonder if Singapore’s approach will eventually encourage an unsustainable dependence on air conditioning as an essential design component. Country-specific rating tools under development in Malaysia, Indonesia, and other Southeast Asian countries, they say, may be more effective at promoting vernacular designs that emphasize passive technologies — such as optimization of shading and ventilation — and a sensitivity to a building’s carbon life cycle.

“Ultimately the goal in these tools is to reduce the (environmental) footprint,” says Deo Prasad, a professor of architecture at the University of New South Wales in Australia who has studied sustainable building policies across the Asia-Pacific region. As Green Mark matures, he adds, an open question for Singapore is: “Are you getting hooked into the energy consumption being absolutely necessary for comfort?”

Singapore, which gained independence from Malaysia in 1965, has long styled itself as a “garden city.” The city-state was built on swampland that has few energy resources, and its founding prime minister, Lee Kuan Yew, made a point of prioritizing environmental conservation. In 2005, the government extended its hands-on urban development policies to its building sector. The centerpiece of that policy shift was Green Mark, a rating tool modeled partly on LEED guidelines. But unlike LEED, which emerged in the private sector and is based on a flexible set of sustainable design principles, Green Mark was launched by a government agency and designed largely to reduce energy and water consumption.

The BCA markets Green Mark as a win-win for businesses and the environment. A recent study by the government and researchers at the National University of Singapore found that a sample of office buildings designed to meet Green Mark standards shaved about 11.6 percent off total operating expenses on average while boosting a building’s capital value by 2.3 percent. The BCA also reports that while new Green Mark buildings typically cost up to five percent more, most developers recoup their initial investment within seven years through energy savings. It helps that in 2009 the agency pledged 100 million Singapore dollars, or about $80 million, to landlords over five years to pay for efficiency audits and install energy-efficient cooling units, motion sensors, and shading devices.

Singapore-based CapitaLand, Southeast Asia’s largest developer, says investments in green-building technologies have played a central role in reductions since 2008 of 11.7 and 16.1 percent, respectively, in the company’s energy and water consumption, and a 16 percent reduction in its carbon emissions — all for a savings of about $28 million. “Our sustainability objectives are guided by the belief that lowering the environmental footprint of our developments through innovation creates value for our stakeholders,” says Tan Seng Chai, CapitaLand’s group chief corporate officer.

The BCA says it plans to certify 80 percent of the city’s buildings by 2030, and several consultants say the goal is realistic. However, the BCA has struggled to incentivize efficiency upgrades in existing buildings, and Green Mark’s success may slow when its five-year incentive scheme for those buildings ends next year, according to Ng Eng Kiong, president of the Singapore Green Building Council, a consortium of 450 building professionals and suppliers of green products and services.

Mark-certified buildings now exist in Asia and Africa, according to the BCA’s John Keung. Officers at four green building associations across Southeast Asia say Green Mark’s success has partially influenced how they developed their local rating tools. “In Singapore everything is driven by the economy,” Ng says, and a future economic downturn as serious as the 2008 financial crisis could potentially reverse some of Singapore’s green-building gains. The BCA reports that some of the city-state’s older buildings have a lifespan of just 10 to 15 years — a fact that could further deter long-term investments in sustainability.

Energy consultants say Singapore, which sits on the southern tip of the Malay Peninsula, has lately emerged as a testing ground for ventilation and air-conditioning technologies that Western and Asian manufacturers plan to sell in China and the rest of Asia. Green Mark’s success, the consultants add, is also a boon for some local businesses and an encouraging example for neighboring countries, such as Thailand and Vietnam, that are just beginning to green their building sectors. More than 400 Green Mark-certified buildings now exist in Asia and Africa, according to the BCA’s John Keung. Officers at four green building associations across Southeast Asia say Green Mark’s success has partially influenced how they developed their local rating tools.

However, Green Mark is a system designed exclusively for a prosperous urban metropolis, and it may not be directly applicable in countries with different political systems, environmental conditions, and standards of living, say green-building experts. “So if you have a house made out of bamboo, it may be the greenest house ever, but using that particular rating tool, you can’t get certified,” explains Ar Sarly Adre Sarkum, vice president of the Malaysia Green Building Confederation. With this in mind, a few rating tools have emerged in recent years that attempt to capture country-specific nuances. For example, a new tool in Indonesia pays more attention to a developer’s choice of building materials, many of which are typically sourced from within the country.

Sustainability experts say that for the moment it is too early to tell how these local tools will fare, and their success will depend partly on the degree to which local governments offer related incentives to developers. Muiz Murad, CEO of Green Earth Design Solution, an environmental consultancy in Kuala Lumpur, says that in all likelihood there will be a healthy coexistence, with a few developers choosing to certify through both a local and an outside rating system. Green Mark is currently very popular in Brunei, he adds, but in the rest of the Asia-Pacific region, the international rating tool of choice is LEED. That, he says, is largely because multinational corporations have internal policies that require them to choose LEED.