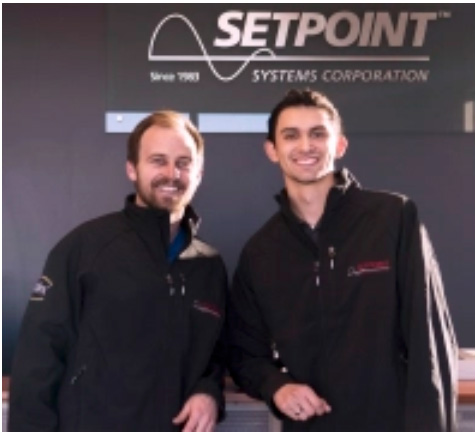 Please join us in welcoming Drew and Scott to Setpoint Systems. When new employees are hired, they are empowered to succeed.

During their five-week training course, Drew and Scott received extensive product and technical training, a company culture review, plus learned our processes, procedures, and standards. In addition to classroom training, they earned a “Masters” level on Delta Controls “George University.”

Drew and Scott completed their training on March 2. Please welcome them to our team.

Drew has played, coached and watched sports his entire life.  In his free time now he plays softball, golf, pick-up basketball, and a variety of backyard BBQ games.

In July of 2009, Drew packed all of his belongings into his Jeep and onto a trailer and moved to Denver from Holland, Michigan.  Holland is where he grew up, went to Hope College, and lived to prior to moving West.  Upon arriving in Colorado, Drew quickly found a position in a small Denver law firm where he moved into an account manager and firm manager role.

Drew’s passion and interests have always been with technology.  Through his interest and efforts in making his home a Smart Home and after 7 years in the legal field, he made the commitment to a career path change with Setpoint Systems.

Drew is impressed with the knowledge level of all his colleagues and anxious to continually learn and adapt to the changing marketplace.  He is excited to meet and help all of his customers realize the potential of their site and the capabilities of their Building Automation Systems.

Drew is engaged to Felice, has a son Hayes and English Bulldog named Lucy.

Scott graduated high school in 2015. For three years he was a Domino’s shift manager, but he felt like he didn’t have room to grow and was ready to do something different. That is when he took advantage of a great opportunity — to join Setpoint and be trained in the building automation industry.

During June through October of 2017, he worked for us as an install helper. It was during this time, he discovered that he really enjoys integrating systems — making all the systems work together, problem solving, and troubleshooting. He admires and respects how Setpoint trains their customers to use the building automation system. He believes Setpoint really knows how to take care of their customers and build relationships.

Scott is currently attending Pikes Peak Community College to earn an HVAC degree. He wants to extend his knowledge beyond the HVAC degree, blending system integration with IT. He’s also really interested in cybersecurity and plans to learn more about it.

Scott played soccer from elementary through high school and hopes to join an indoor soccer team soon. He enjoys working on his car and playing video games. He is in the process of moving into his first place with his girlfriend. Life is good and he is ready to explore the opportunities that are available to him from Setpoint.