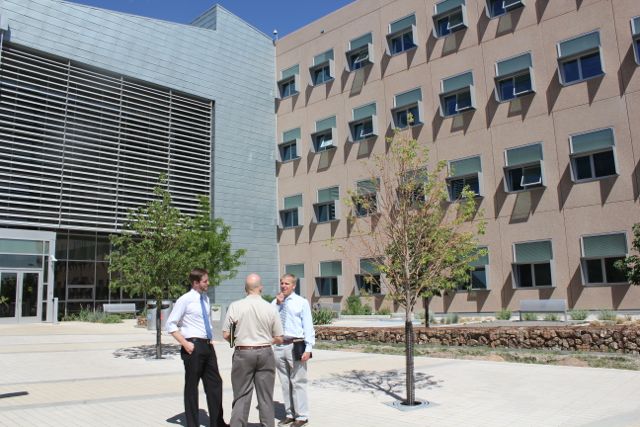 Hard results of green buildings in Colorado accelerate the adoption

Buildings are improving, becoming more comfortable but also more efficient in use of energy and water. How can this adoption of best technologies and designs be accelerated?

A panel of experts at the Rocky Mountain Green Conference held in Denver recently agreed that examples help. And Colorado has many examples.

“At the end of the day, hard results are the best education,” said Jeff Ackermann, director of the Colorado Energy Office. “If you create baselines of comparable buildings that are built to current high standards—if people can see the real benefits, that is where the conversation starts.”

While energy-efficiency has drawn much attention, he added, the conversation about sustainability should also encompass water use, indoor air quality, and proximity to mass transportation. All are criteria used in the U.S. Green Building Council’s LEED evaluation process.

Some of Colorado’s best examples are found at the National Renewable Energy Laboratory, located just off I-70 in Golden. The campus has six buildings certified at the highest level of LEED certification, platinum. One of them is the world’s largest net-zero energy building. NREL uses techniques, such as maximizing use of existing daylight, to reduce need for artificial lights, and maximize solar collection. The parking spaces are covered with photovoltaics.

On hot summer afternoons, the building produces more electricity than it consumes. Other times, it must draw on the grid. As such, most net-zero buildings rely upon carbon energy for backup.

But it’s easier to hit such lofty goals in building performance when you start from scratch, pointed out Frank Rukavina, sustainability director at NREL. He noted that residential and commercial buildings account for about 40 percent of all energy use in the United States. As such, they represent a huge opportunity for potential savings.

Much is happening in Denver. Jerry Tinianow, chief sustainability officer for the city government, said that municipal buildings have become 20 percent less energy intense, with an additional goal of milking another 5.6 percent in savings as compared to the 2005 baseline.

Denver is also trying to help create other models. One is at the former Lowry Airfield, on the border with Aurora. There, a 70-acre enclave called Buckley Annex is being planned as a net-zero neighborhood, meaning the amount of electricity consumed on site in homes, businesses and other community infrastructure will be no greater than the amount that is produced there.

Another project aims for net-zero in commercial buildings downtown. It is moving forward under the auspices of Architecture 2030. “What we really like about it is it’s a voluntary association and not a city-mandated association of buildings, and it’s one in which the government plays a secondary role,” said Tinianow.

If buildings produce their own energy, they won’t rely upon utilities for outside generation, at least not in the same way. Such dispersed production is called distributed generation—and it’s worrisome to utilities whose business model for the last century has consisted of earning revenues based on the volume of electricity sold.

According to Mark Schwartz, representing Xcel Energy on the panel, “We are trying to find a way to embrace that,” he said of local, distributed energy generation.

“Through energy efficiency programs, we have been able to drive down the demand curve.” But net-zero buildings during the next 15 years “has to be something we look at from a utility perspective.”

Tinianow pointed to residential energy efficiency programs that make inefficiency upgrades part of an employee benefits program, similar to a 401k benefit. When that happens, he said, “We will see massive expansion of energy efficiency improvements.”